Have a tough or unique problem? Ask CRI, we'll deliver your solution!

Why is Ancient Roman Concrete So Durable?

(Excerpted from an article in Science Magazine)

Modern concrete—used in everything from roads to buildings to bridges—can break down in as few as 50 years. But more than a thousand years after the western Roman Empire crumbled to dust, its concrete structures are still standing.

Now, scientists have finally figured out why: a special ingredient that makes the cement grow stronger—not weaker—over time. 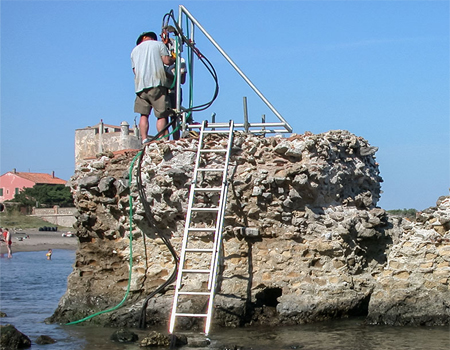 Scientists began their search with an ancient recipe for mortar, laid down by Roman engineer Marcus Vitruvius in 30 B.C.E. It called for a concoction of volcanic ash, lime, and seawater, mixed together with volcanic rocks and spread into wooden molds that were then immersed in more sea water.

History contains many references to the durability of Roman concrete, including this cryptic note written in 79 B.C.E., describing concrete exposed to seawater as: “a single stone mass, impregnable to the waves and everyday stronger.” What did it mean? To find out, the researchers studied drilled cores of a Roman harbor from Pozzuoli Bay near Naples, Italy. When they analyzed it, they found that the seawater had dissolved components of the volcanic ash, allowing new binding minerals to grow. Within a decade, a very rare hydrothermal mineral called aluminum tobermorite (Al-tobermorite) had formed in the concrete. Al-tobermorite, long known to give Roman concrete its strength, can be made in the lab, but it’s very difficult to incorporate it in concrete. But the researchers found that when seawater percolates through a cement matrix, it reacts with volcanic ash and crystals to form Al-tobermorite and a porous mineral called phillipsite.

So will you be seeing stronger piers and breakwaters anytime soon? Because both minerals take centuries to strengthen concrete, modern scientists are still working on recreating a modern version of Roman cement.

We aim to deliver exceptional results. Our portfolio of services includes, but is not limited to, concrete and asphalt work, water management (including sewer, water, and drainage projects), water recharge system installation, management and delivery of all phases and requirements of site-work, and professional dismantling services.